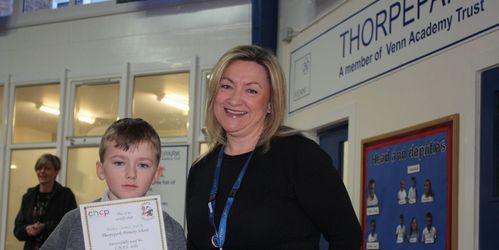 Bailey is a pupil at Thorpepark Academy in Hull and, along with the rest of his class, had the training in October 2018. Then at Christmas he was playing with his cousin and noticed something was wrong.

“We’d just finished our tea and we had some sweets and I heard Finley choking,” he said. “When we did the training we got taught two ways to stop choking and I did the first way: I whacked him on the back between his shoulders with the heel of my hand. He was coughing a lot and he went really red; I was terrified but I hit him about 10 times until the sweet was dislodged.”

Bailey’s mum, Emma, said, “I’m so proud of him. I wouldn’t have known what to do but Bailey just used his training. His cousin didn’t understand what had happened and was complaining that Bailey had hit him!”

The IMPS team have trained over 32,500 children since the project started back in 2001 and sessions are offered to all Year 6 pupils in Hull. They are taught basic first aid skills through the intensive prevention programme, which links into Key Stage Two education standards. Pupils are taught how to prevent and deal with the most common accidents that children of their age are likely to have like burns and scalds, falls, electrocution, choking, bleeding  and road traffic accidents. They also learn how to perform basic life support and how to put people into the recovery position.

Donna Shipp, Hull IMPS co-ordinator, is very impressed with Bailey’s quick thinking. “Bailey is a very brave and clever boy and the IMPS team are so proud that he was able to use his skills in such a positive way. He remembered exactly what to do when he realised his young cousin was choking, preventing a potentially life-threatening situation. It is stories like this that prove the effectiveness of IMPS. A huge well done to Bailey!”