Street Angels ready for what's around the corner...

Hull Street Angels Trinity were awarded a small grant from CHCP Foundation in December 2015, to provide resources, supplies and literature. The following is a short story of a typically night faced by the Street Angels.

Hull Street Angels Trinity volunteers tend to follow the city centre night life buzz. Navigating the neon lights, checking dark corners, finding glass bottles and other hazards. It’s almost like they’re on a pub crawl with you... Only a few steps ahead keeping the street safe.  But however calm a weekend night might appear... Things may change around the next corner.

In October 2015 Mick and Nick were walking along the cobbled streets up towards a nightclub. This was a popular route for most people and therefore we like it too!

As they stopped to look back at the street,Mick spotted a young female on a door step... She was alone and appeared to be asleep with people staring at her. Approaching to introduce themselves they got no response; further more a mobile phone was in her hand.

Two female bystanders came across to explain what had happened. Apparently the female left the nightclub, sat down and tried to ring someone but fell asleep. Looking at her phone they called the last number she made. A male voice responded and the situation was explained. Amazingly the person was a cousin and he was in the nightclub. A simple solution... “Come outside and help your cousin, she needs to go home”. He agreed but didn’t appear to be in a rush to end his night early.

After another phone call he eventually came out and the two Street Angels explained again who they were and the dangers of the situation. At this point water had been given and a foil blanket was being used to keep her warm and maintain her dignity. The cousin agreed it was cold and he went back inside the club to fetch his own lovely thick coat; returning he thought it would be funny to take pictures of his intoxicated female cousin wrapped in a foil blanket.

Repeating the need to get her home now and how taxis would be reluctant to take her, Mick and Nick strongly advised the cousin to ring his family and friends to arrange a lift.

Through general discussion with the cousin to assess what had led to this situation, the Street Angels found out the female was 24, an athlete who didn’t usually drink. Apparently it was a rare occasion for her to go drinking with her family. In fact her younger sister was in the club... Mick & Nick asked “can you ring her sister so she can help?” The cousin tried but the younger sister was reluctant (being 17 she was more concerned not being able to get back into the club). The Street Angels being the voice of reason explained the night was over, it was time to look after your sister and go home. They also asked the cousin to take his nice coat off and give it to his shivering relative.

Both the cousin and the sister made a number of phone calls but no luck contacting parents or their friends... Until the cousin realised he had a friend that could drive... and he was in the club. The friend came out almost immediately and went to fetch his car that was parked around the corner.

This incident lasted over an hour. As an experienced first aider, Mick monitored the young female throughout; although her response improved, she had difficulties walking. There was a real concern she might need an ambulance if no transport could be found.

After the incident was resolved, Mick & Nick realised how the cousin and the younger sister didn’t understand the potential danger their own family member was in. It appeared they were more focused on how they could continue their night out.

The Street Angels often see intoxicated people left by their friends; either because they didn’t notice the signs, or they didn’t want their night to be spoilt by taking someone home early.

Without the Street Angels, the 24 year old female found a sleep with her phone could have potentially become a victim of crime or had to be taken to A&E. If her family and friends spotted the signs earlier, her night could have been safer.

This year Hull Street Angels Trinity will be launching a campaign to not only raise awareness of responsible drinking; but also friend awareness.

If you would like to support them please do not hesitate to get in touch by emailing coordinator@hullstreetangelstrinity.org.uk 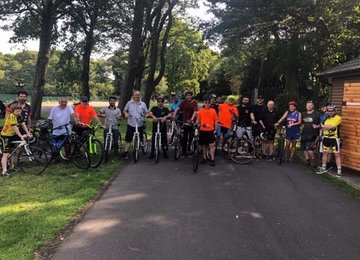 Our Warm Welcome get on their bikes thanks to charity grant

A St Helens charity that helps refugees and asylum seekers to bring life back to old bikes so they can use them as transport, was boosted recently by a grant of £874 from City Health Care Partnership Foundation.