Sock it to Eating Disorders

From Monday 11th until Sunday 17th February 2013, EVOLVE – Hull’s new eating disorder service provided by City Health Care Partnership CIC (CHCP CIC) – will be pulling their socks up as part of Sock it to Eating Disorders, the national fundraising campaign being run by the charity Beat.

The campaign will run as part of Eating Disorders Awareness week and encourages people to wear silly socks for a day in exchange for donations.

Beat is the leading UK charity for people affected by eating disorders, their family members, friends and carers. They provide help lines, online support and a network of UK-wide self-help groups to help adults and young people in the UK beat their eating disorders.

The National Institute of Health and Clinical Excellence suggest that 1.6 million people in the UK are affected by an eating disorder, of which around 11% are male.*

Throughout the week the Evolve team will be visiting various venues. Members of the public are encouraged to come along to Health Central, Ferensway on Tuesday 12th February between 10.00am and 1.00pm or Hull University on Wednesday 13th February all day. The team will be handing out freebies, resources and information – on the services and support available to those affected by eating disorders in Hull. The team will also be taking donations for Beat.

Eating Disorders Awareness week is a way of raising awareness and understanding of the serious nature of eating disorders as a mental illness. It also provides an opportunity to challenge stereotypes and stigmas and raise money for Beat.

“Although wearing silly socks is a fun way to raise awareness, we need to remember that eating disorders is a serious subject which affects over a million people within the UK.” Zoe Howley, Occupational Therapist for Evolve.

How your donation helps

Donations can also be made by visiting: www.virginmoneygiving.com/team/HullEatingDisorderService 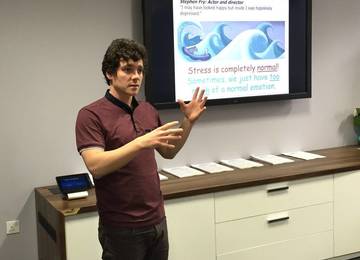 Feeling stressed or anxious? Help is at hand in the shape of a new free service. Let’s Talk stress control groups, run by City Health Care Partnership CIC, are open to anyone aged 18 or over who feels they are suffering with stress or other common problems like depression or anxiety.

What I really liked was that I was taken seriously with my issues. My therapist talked to me in a calm and comforting manner. I cannot think of any improvements. I recommend this therapy to anyone.